Contract Labour Is Cheap Labour And It Can Now 'Legally' Flood Australia! 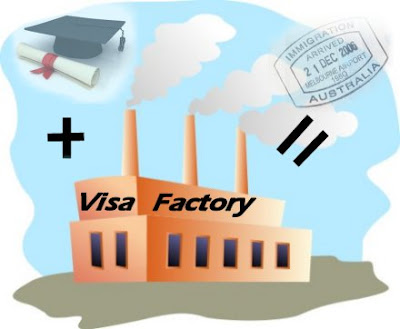 Australian Workers: It Is Time To Fight!


Contract labour enters Australia as temporary visa holders. Some acquire that right as part of the overseas student rort; others are part of a mobile pool of labour hired by foreign body-hire companies for employment in Australia. Strong evidence exists that many of these companies are fraught with criminal overtones. Others (like the Chinese or Vietnamese ones) are state agencies.


Australian workers cannot look, either to Tony Abbott's Liberal Party (which started the whole Section 456 and 457 Visa scam), or to the Greens (who favour the 'rights' of these parasites) - for any sympathy. They must now look to themselves for strength and to a new party like Australia First for political action.


The contract labourers who now number over 70,000 persons are joined by up to 60,000 illegal workers. Numbers have been rising steadily.


The truth has been revealed by a report issued by the Construction, Forestry, Mining and Energy Union (CFMEU) and to be launched within days. The report, which analyses recent government statements on the visa scheme, finds that Australia is not requiring employers to prefer Australian over foreign workers in hiring - or in retention in case of redundancies. Nor can Australia freely change the list of occupations for which
the visas can be granted, nor cap the numbers of visa holders in a particular year. The number on the scheme is now set to explode. The CFMEU has approached the Immigration Minister, Chris Evans, in letters and in meetings. Union leader John Sutton said: ''What they are saying is that their hands are tied by international obligations under the World Trade Organisation and the Doha round of trade talks. This report has found that that is not the case. We are not bound, but the Rudd government is totally mesmerised by being seen to support a free-trade agenda internationally.'' Indeed, all Australian governments are hitched to the globalisers' dream of a borderless world - borderless for goods, capital and workers.


Senator Evans has replied to the CFMEU: ''We cannot create legal obstacles for overseas workers or introduce preferential treatment for Australian workers without compromising our international trading position and legal obligations."


The minimum salary or wage for a visa worker is sometimes 60% of that of an Australian worker.


If employers are no longer even compelled to demonstrate the 'need' conclusively, they could sack current workforces on certain pretexts - and rehire aliens.


It is strongly rumoured this may occur at the Burrangong Meat Works in Young.


Obviously, unions like the CFMEU may be compelled to fight the government.


"Contract labour, hired by the big transport companies, has become common. It denies many ordinary Australian drivers a job and it increases the profitability of the large companies against owner drivers. We have noticed large numbers of contract drivers from Sudan and South East Asia. Some come on trainee schemes and we have been told the government subsidises the scheme. These drivers are not as hounded by the authorities to comply with regulations as are we".


Originally, cheap labour, drawn from the South Pacific and from China, was a factor in fuelling the original Australian trade union movement over 100 years ago. It was a cardinal rule of policy that cheap labour would be refused access to Australia.


All this changed with the globalising 'vision' which grew to dominance by 1990. The availability of foreign contract labour - and now even domestic contract labour which enters under the guise of 'refugee' and overseas student programs - is too much of a temptation to the dominant class.


Similar problems build similar movements. It is obvious enough that the Labor Party and its unions are no longer any sort of representative of the working population. However, for Australia First, it is the original model of a united people's movement, which the former Labour Party grew out of - to which we must turn.


The threat of cheap labour may drive tens of thousands of Australian workers into unemployment and continue to deny employment to those who lost jobs in the current economic downturn.


The cheap labour curse is a recipe for unlawful conduct. Australia First could not legally condone those who might break the law in wildcat strikes or actions against such unconscionable scabs, but we could understand the frustration and the anger denied a job to support their families.


Whatever occurs, it is time for Australian workers to fight back howsoever they can - through any union or association which is prepared to go the distance industrially and through Australia First, the only political party prepared to say what needs to be said on the political front.


In unity, we will have the Australian people's movement that can ensure that Australian Jobs For Australian Workers!

Posted by Australia First Party Queensland at 10:18 AM