Tony Abbott Belongs In Prison: Not In Parliament! 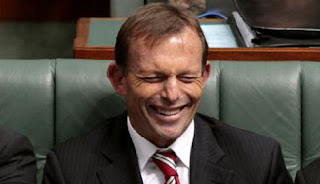 The elevation of Tony Abbott to lead the Liberal Party represents the workings of our political system at its most intricate and at its most dirty.

Most Australians consider that Australia has a ‘two party democracy’, two main parties, surrounded by other ‘minor’ parties which favour in one way or another one or the other of the central two machines, but which offer variations on each and ensure political honesty. The two main parties ‘argue’ - and these arguments are taken as real.

In truth, Australia has a one single regime party with two faces. Occasionally, as amongst any leadership, a division of opinion may result and a brawl ensues. We see that over so-called climate change, but we do not see anything other than ‘bipartisanship’ over all else that really counts. We may see the minor parties bicker too, but all roads lead back to keeping the main parties in the saddle.

The class which owns the Australian state (we can call it the ‘regime’ if we like) wants the opening of borders to the free movement of capital and labour, wishes to facilitate the rise of China to superpower status, supports multiculturalism, follows the US superpower into Middle Eastern wars for oil and Israel, agrees with increases in Third World immigration and refugees, and supports internal repressive laws and structures to impose these policies.

The two main parties follow these policies absolutely because they are owned and managed by the same class of people, a veritable traitor class that serves the foreign interest and in which many politicians themselves can also find membership. The rewards are great.

As circumstances change, the colouring of one or the other of these parties is more suited to carry out the governance of Australia to ensure the traitor class line is implemented.

At present the Labor face is in the ascendant. This means the soft face says there is inclusion for all and welfare for hard times, reliance on the chattering classes to explain policy and the liberal media - and increasing immigration for growth because it is our future to become a larger country of diversity and wonder.

However, like with a fine tune dial on a TV set, we can tune in the Liberal face which is the secondary one at this time. It is there to ensure the continued system loyalty of its voters and followers and the minor parties and groups which ‘lean conservative.’ Out of government it may be, but that part of the Liberal game goes on. If people get annoyed with the Labor face, this one promises a ‘change’ back to conservative principles and family values and some flag waving.

Nothing systemic will change here. However, we are to be told increasingly that some struggle exists between the faces of the regime. Why tell us this? Unless the traitor class that owns the state itself is fearful of a new challenge. Challenge from whom? From the nationalists like Australia First and other patriotic forces. So, enter Tony Abbott to fight that challenge.

We have to consider the dirty side of politics. Traitor class politics is spiritual dirt paraded about as mainstream cleanliness. Mainstream? Sewer stream!

So Abbott has conspired in the past to serve his fellows. The ‘mad monk’, the Catholic conservative who almost baulked at sex before marriage and preaches for the family, has a real-life side, a dirty side, which is there to serve the traitor class.

Some years ago, through the "Australians For Honest Government", he laboured to bring down popular figure, Pauline Hanson. This shadowy body run by Peter Coleman, father in law of Tim Costello and one-time NSW Opposition Leader, raised funds to sponsor a legal case against Mrs. Hanson. It offered to pay off a low dog called Terry Sharples who filed a civil suit against Hanson over electoral entitlements. The evidence produced became the basis of a flawed prosecution which saw Hanson falsely imprisoned. Yet, her release from prison served as the cover-up for a full investigation into Abbott’s role in the operations of these ‘Honest’ men. The successful appeal case meant no commission of inquiry would ever investigate the ‘Honest’ ones; and we can be certain that the regime of KRudds and Abbotts will make sure that never happens. The ‘Honest’ men stay in the shadows.

The ‘Honest’ men infiltrate parties, undermine political rivals, spy for the Liberal Party (mainly) and spread rumour and falsehood against their targets. Their staff and their agents privatise the aims of Australia’s even ‘more secret’ political police agencies – which do admit to working against Australian patriots and nationalists. We could, if we wished, name innumerable persons formerly of One Nation and other parties who have served as disruptors for the ‘Honest’ men (and for the political police).

Tony Abbott knows much and says nought. He knows how politics really works and it’s not the fairy-land of free elections where bits of pencilled paper in ballot boxes determine who governs. That determines only which face of the traitor class is presented to us; it does not determine whether we, the people, govern.

Essentially, Abbott is just another grub in a long line of grubs. He is part of a machine. When he faced off the One Nation challenge, he did so with more than pimps and court cases. He even reconstructed the Liberal Party, dredging up some old leaders from an old 1980’s faction and he relaunched them (mainly in New South Wales) to keep the conservative faithful in the ranks long enough for him to disintegrate Hansonism. It was masterly muck, done at Howard’s request. It has a certain gutter style and is to be respected for its diabolically anti democratic quality! Bravo, grub!

Yet, Abbott shows a propensity to undertake destabilizing pursuits on a much larger scale, when in 2003, in his position as a Howard Liberal Party Cabinet Minister he supported the war against Iraq. The Liberal inner circle employed a litany of deceit to inflict war against the people of Iraq – for oil and for Israel – all the while telling us outright lies about “weapons of mass destruction” and Saddam’s “links with Al Qaeda”. The resultant carnage, suffering and environmental devastation - is the first great war crime of the twenty first century.

So we stand in the presence of a determined traitor class fighter from whom we should expect little mercy or regard now that we are organizing ourselves as a party. Nor should we give the slightest concession to the pseudo-patriotism the Liberal Party will surely invoke. Not the slightest wink at ‘border control’ chatter, ‘tough’ lines on asylum seeker invaders, flag waving. We have seen it all before. And to use Abbott’s favourite word: it’s bullshit.

For his role in the Hanson affair and for the Iraq war, Tony Abbott belongs in prison and not in parliament. He takes risks to do his job. So must we – to rid ourselves of creatures like this..

The Australian people demand from their party determined advocacy of their rights – to employment without contracts, to a tertiary education without overseas students, to run a business without bureaucracy, to preserve their heritage and their identity as a people. So the Liberal Party under its new boss will receive from us what it deserves – contempt and trenchant opposition. Forward Australia First!
Posted by Australia First Party Queensland at 5:50 PM