Peter Schuback On The Flood Crisis 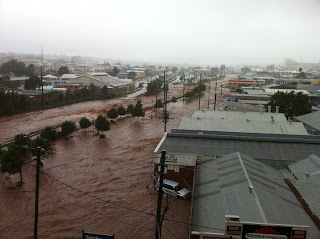 In 1974,  flood levels were noted and yet councils allowed people to build in the areas that were flooded in 1974 . Natural water courses have now been built on, or blocked - and in most other cases the councils and State governments have failed to clean and maintain them.
If you build on a water course you are going to get flooded sooner or later! I believe that is one of the reasons that the current predicted flood levels will be much higher than the 1974 flood levels.  Councils and State governments have to stop all forms of development in these areas and they have to reclaim any land that has been a water course in the past .
This sort of flooding is going to happen again and again and people have to be protected from the devastating effects of these types of events. There is also another major worry that the Councils and the State government in the south east of the State do not want to address and that is the effect of what will happen if the Wivenhoe or Somerset dams fail and send the water down the river system to Ipswich and Brisbane .
The question has to be asked , JUST HOW SAFE IS THE WIVENHOE DAM and how much water can it hold back before the walls collapse and kill hundreds of thousands of people in the south east of Queensland .
Given that it is State government policy to keep building south-east Queensland for the benefit of new migrant arrivals, we can expect further disasters!
Posted by Australia First Party Queensland at 9:31 PM