The Greater Significance Of The Australian Light Horse Charge at Beersheba 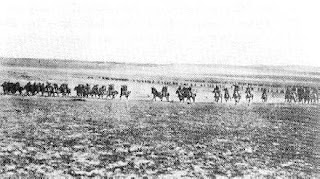 A photograph of the charge of the 4th Light Horse Brigade at Beersheba.
The following is a speech given by Jim Saleam to a special commemorative meeting for the 92nd anniversary of the great Light Horse Charge at Beersheba.

The meeting, hosted by the Friends Of Henry Lawson, featured speakers from cultural groups and readings from Australian military history.

The speech has been very slightly edited.

I am not talking of the history of the event we are here to honour. Rather, I am talking about impressions of that event. I suppose that's about building culture myths. Mythology doesn't just mean those wild Greek tales - or fairy-stories peoples sometimes tell. I can tell you as a student of Australian culture history that the Myth is actually about the setting of images in people's minds, an idea, a standard, a set of moral ideals and so a collective unconscious emerges that unites a people together. We go on to fashion ourselves and our lives around it. Myth is a powerful thing. And to use the Greek sounding term palingenesis - rebirth - we could say that the eternal return of the central Myths of a people presses people into its service in a new time.Weighty stuff. So, now you get it. What did Beersheba mean for Australians? Then? Later? Now?

The first thing I ever heard about the charge at Beersheba was a little bit of adult chatter, somewhere, sometime. Maybe I was 6 years of age. It became real a few years after that, when our primary school was blessed with an elderly gent who was brought along one day about 1965 to tell the tale.

Let's be honest. Some bloke about 70 looked like a bloke about 100 when you're ten. So, he was revered on that account alone.

But he told a bloody good story. The only bit I remember was something about the Turks being bad shots 'cos they hadn't adjusted their gun sights. He was here and that was the proof of that.

That's the Myth in action folks. The storyteller from the golden age, telling you a great tale from when he was young, when he could have died, but for luck. Something that did all proud. It was your history. No one else's. The truth belonged to you if you too dared to live it. And there was the promise that if ever you were tested you could do just as well.

Our school was blessed by such a speaker. Indeed, we often had speakers about important events in the national history or we saw great icons of that history like the Eureka Flag.

Released in 1940, the film's nationalistic sentiment and dramatisation of Australian success in battle touched a strong chord with a new generation then at war. The story follows three larrikin Light Horsemen and their role in the desert campaigns. The three leads, played by Grant Taylor, Chips Rafferty and Pat Toohill, are introduced to us playing two-up in a market place and indulging in tom foolery, including taking a wild donkey ride through town and into a cabaret club
(the same themes used in Mel Gibson's Gallipoli). The celebrated climax of the story plays out the famous charge at Beersheba. The film broke national box office records and also had considerable success on the international market.

We all loved it as 1960's kids.For one, I have shown the film at various meetings since in my adult life.

This film renders sacred too the sand dunes at Kurnell, but a few kilometres from where Captain Cook proclaimed that modern civilisation had come to the oldest Continent. White fellas history all that, but just as meaningful to us as black fellas' Dreamings.

In other words, in fact, film about the charge at Beersheba sanctified our native ground in the reliving of it.

The charge at Beersheba soon entered the Australian consciousness. The realist paintings of Lambert, the exhibitions collected for the National War Museum, the ANZAC Day commemerations that began in the 1920's, at the RSSAILA Clubs and so on - were all signs of that. Side by side with ANZAC Cove, it illustrated the right of the new nation to be taken seriously by others. At the Versailles Treaty conference in 1919, Australia spoke for herself. One could say that the desert war gave more of a right to this than the meat-grinder trench warfare in France. It is proper to
remember.

Of late, as part of our own Culture Wars in Australia, publicity has been given to an incident where some Light Horse committed what was, in modern politically-correct-speak, a war crime in shooting some people in a local village.

It is one thing to record the truth, whatever it might be. I wonder whether the publicity given to this minor affair serves a darker purpose? To undermine the national myth perhaps?

Interesting too that we can also draw a point about Australian service in war. Some people say that this service has always been at the behest of big players who misused our manhood. Sad to say, but there is truth in that. A young country can be swallowed up in the misdeeds of others. But the Australians in Palestine had another side too. We know that the British and the French betrayed the Arabs who rose against the Turks. Yet, young Australia believed as Colonel Lawrence believed, that a free Arab world was in the interest of the Allied Powers and that the Ottomon Empire be consigned to history.

It is sad that some people get that wrong today. I saw a newspaper last year issued by some Christian folks around Fred Nile - and they say that the Charge at Beersheba was all about making Israel and they praised up the Israeli government for allowing certain remembrance ceremonies on the site. Bad religion and bad history. If the Aussie charge had anything to do with the birth of that state, it was because of the betrayal of the Arab Rising by the British and the French - and not of an action born of our will.

Yet, history plays tricks on that - and the Australians are still recalled in Palestine and Syria as men who came to set those countries free to make a better world. The Arabs might rail against the others, but not against the Australians.

If it had been up to the Australians alone, I can see that this would have been precisely what they would have done.

We may say that freedom, the freedom for all peoples, rode with the Light Horse. Let us remember that as we try to set our own country free.


The Legend of the Light Horse lives in all of us. Celebrate it.
Posted by Australia First Party Queensland at 3:08 PM