Time For A Community Strike! 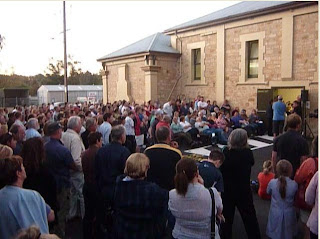 Some 400 refugees will be dropped into the Adelaide Hills town of Inverbrackie. So much for the Julia Gillard and Tony Abbott election-period spin on deterring 'asylum seekers'.

Stop the boats? No: fly them in! Disused army facilities will be turned over to the parasites. A large protest meeting at the Woodside Town Hall on October 21 drew some 400 people.

The Australia First Party supports the people of the Adelaide Hills in their concerns and in their protests. The party will commence activities there very soon.

It is a people's struggle that is the decisive thing and it is difficult for direction to be found amidst the chaos of recolonization.

The dark terror that will be waged by Moslem extremists, Tamil Tiger guerrillas, Afghan drug criminals, African animists and so on is but a matter of time. It sums to culture busting (the process by which Australian community feeling and identity is broken down) and is also a type of state-terrorism against the Australian population - ethnic cleansing!

Resistance must become permanent, regardless of what the government does.

Australia First Party proposes the model of a Community Strike:

No Australian should collaborate in any way with any government agency which operates the project.

No Australian should communicate with any so-called refugee.

No Australian should accept any employment arising from the intrusion.

No Australian should attend any church or community group that supports the refugee invasion.

All should shun and avoid any person who violates these rules.

The people of the area should ensure the election of fighting councillors to defend their interests at local level.

Australians should affiliate to and support their Australian heritage or community organization of choice.

The people of Inverbrackie and the Hills area generally will be vilified by the national media and other psychological terrorists for any patriotic stand they take. To end the refugee invasion, to repudiate the United Nations treaties, to punish those in political office who have allowed this, are enormous questions. The people of Inverbrackie have been put in the front line of a battle for the future of Australia.

If you don't fight - you lose!


The Australia First Party will campaign in the Adelaide Hills area on the matter of 'refugee' settlement.

The party has issued a general statement on some of its websites (as on this Blog).

It is argued by Australia First Party that the current Inverbrackie intrusion was planned long before the election period and that the current government was always well aware that numbers of supposed refugees (or in newspeak - 'asylum seekers') would explode. It is further argued that the Liberal Opposition has no policy other than to allow the influx.

Dr. Jim Saleam, speaking on behalf of the national management committee of the party said today:

"Unlike any other party in Australia we are pledged to repudiate all treaties on refugees. We are committed to their return to their countries of origin or to some other place. We are aware that the refugee numbers are limitless and their numbers can only increase with the failed wars of the New World Order system to which Australian politicians are loyal."

The Australia First Party does not interfere in the local efforts of Adelaide Hills people to resist the takeover of their communities by aliens, nor does it dictate any line to anyone. It works independently. The party will state its views without compromise.

"The refugee groups may or may not be genuine in any claims they make about their former homelands, although many are economic invaders, criminal elements and connected to extreme political violence. Their tales of woe are not our business, nor should they be used by clergymen or Human Rights agencies with false agendas. The 'refugees' are being used to culture- bust the Australian identity and heritage as the country is opened to massive population increases that will globalise its citizenry as the follow-on from the globalization of its economy and politics. This is recolonization."

Australia First Party will become a registered party in South Australia in due course.

"Our program of resistance is a peaceful citizen-based protest which cuts ties of all sorts with state authority and its propagandists. Whether people can resist the Human Rights 'anti-racist' thuggery that will invade the Adelaide Hills will be a test of Australian resilience against the literal stealing of our futures with state-sanction. It is unique in human history."