This Sunday 8th August - 10am at Parliament House in Brisbane.  Please promote widely immediately - this is a hot topic, media are sniffing around and it is Homeless Person's Week!


Mission Australia have, as of today, withdrawn their support for us but that just means we won't be fundraising for them - the cause remains the same.... I refuse to be intimidated by threats of legal action - this cause is too important.

It’s come to our attention that you and people/organisations you are associated with are seeking to hold a protest under Mission ’s Winter Sleepout banner this week at the Virginia Palms Hotel in Boondall coinciding with National Homeless Persons’ Week.
Mission does not support this protest nor the misuse of the Winter Sleepout name in this way.
As a result Mission has taken the decision to terminate your registration as a participant in Winter Sleepout effective immediately.
To continue using either ‘Mission Australia’ or ‘Winter Sleepout’ in conjunction with your activities, or in any way suggesting Mission Australia sanctions your event, could result in us pursuing legal action.
Can I take the opportunity to further disassociate Mission from your activities by stating the following:
Mission wholeheartedly supports the right of refugees to come this country.
Mission supports the policy approach of providing care to refugees in the community.
We work with hundreds of refugees every day, helping them resettle and have a deep undertstanding of the often traumatic issues affecting them.
Mission is aware of your intention to organise homeless people to participate in your protest. Mission does not support the exploitation of vulnerable homeless people for this end.
Mission completely rejects the hateful and divisive views underpinning your planned protest and those groups devoted to promulgating them.
I hope this message provides you with a clear understanding of our position."
Regards


Jen Cramond - Community Fundraising Manager, Mission Australia
E:     cramondj@missionaustralia.com.au | P: (02) 9219 8016 | M :  0449 178 474
A:     L8 580 George St, Sydney NSW 2000| W:     www.missionaustralia.com.au
MY REPLY:
Jennifer,  Thank you for your email....I HOPE this is a simple misunderstanding - perhaps a misunderstanding created by some biased media reporting somewhere????  If you can point me to this or whatever it was that gave you the impression we are motivated by 'divisive and hateful' and views, I will then be able to understand and forgive the very hurtful accusations in your email.

The point is that, due to very vocal lobby groups, claiming to be acting on behalf of refugees, the refugees are receiving BETTER treatment than our homeless citizens - it is this inequity to which we wish to draw attention.  This, by no means, suggests we do not care about the refugees.  We care about a total approach to the world's problems - a solution rather than constant 'band-aid' efforts.  These are not difficult subtleties to grasp...surely....

When it comes to refugees we would prefer that the government deals more appropriately with the causes of the problems in the countries of origin of the people who are forced to leave their loved ones and homelands to travel to a foreign Nation for refuge!

Our government does NOTHING to fight against the imperialistic actions of mining and oil companies (and other parasitic global corporations) that deliberately create and/or inflame ethnic/political divisions within the countries where they wish to take control of natural resources or access routes.  THIS courageous governmental action to refuse to support these activities, is what is needed - otherwise the whole rest of the world - all of us decent people who take regular time out of our busy lives to assist the homeless AND refugees will be constantly mopping up an ever-increasing human tragedy!

If the media reported accurately on what our stance is regarding this and the homelessness issue, then you would know this.  Can you please, at the very least, advise what belief you were labouring under when you penned the email?

Our goal is to assist ALL Australians to have a decent opportunity to be self-sufficient AND, at the same time, to force our government to face up to the hypocrisy of its support for wars for oil, lack of action on alternative fuel sources, lack of real concern for atrocities (such as Gaza) etc etc......I have no doubt that most of the refugees that come to Australia would RATHER their own Nation became a safe place to stay, rather than coming here and facing an incredibly difficult battle re-settling their families.

It is interesting to note, in your email that you admit that a lot of the resources of charities such as yours are also being diverted to this end - ie. dealing with people from OTHER Nations.

For some reason, anyone who questions the arrival of refugees into Australia is instantly labelled, as a fait accompli, 'hateful' and 'racist'.  Could it be, perhaps, that those who control the corporate media are biased to prefer to keep the current state of insanity (where-by our government contributes to creating the very problems that create refugees)?

We would be the last people to exploit vulnerable people!  We are fighting HARD to get our government to make some REAL changes that will stop the ever-increasing numbers of homeless Australians and refugees.

One has to wonder why the agencies and individuals involved in 'helping' these people seem hell-bent on avoiding to help anyone who seeks to STOP the creation of more homeless and refugees.  So many agencies and individuals who work in these areas appear happier to continue to keep their job in social work, psychology or whatever, rather than working to PREVENT mental illness, drug abuse, international policies that create division in other Nations etc!!!!!!!  One HAS to wonder what their REAL motives are?  QUI BONO?

I trust you that you and I are, actually, on the same side!
If the registration is terminated then I'm sorry but I cannot continue to support your cause or to fund-raise for you.  My registration was faxed to you on Friday and terminated today, so would you like any money we managed to collect during that period?

Yours in faith and the pursuit of truth and REAL liberty for all!
Jane 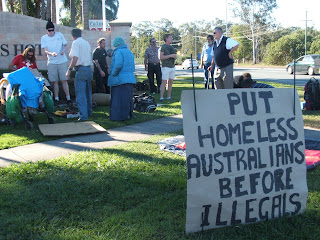